SSCC labels are extensively used in both retail ( supermarkets, drugstores, fashion, flowers (floriculture) and pharmacy) and the non-retail sectors.

SSCC complies with the international standard for shipping and receipt of goods. Thanks to its tracking and tracing system, SSCC makes the logistical operation better, simpler, faster and more efficient.

The utilization of SSCC greatly improves the stock management for the supplier and reduces the shipping time for the customers. It ultimately provides benefits to all the users in the supply chains and leads to significant logistics cost reduction.

What are the benefits of SSCC?

SSCC stands for Serial Shipping Container Code. SSCC is an internationally accepted shipping code which suppliers on the form of a barcode apply to their shipments.

Example of a A5 SSCC label 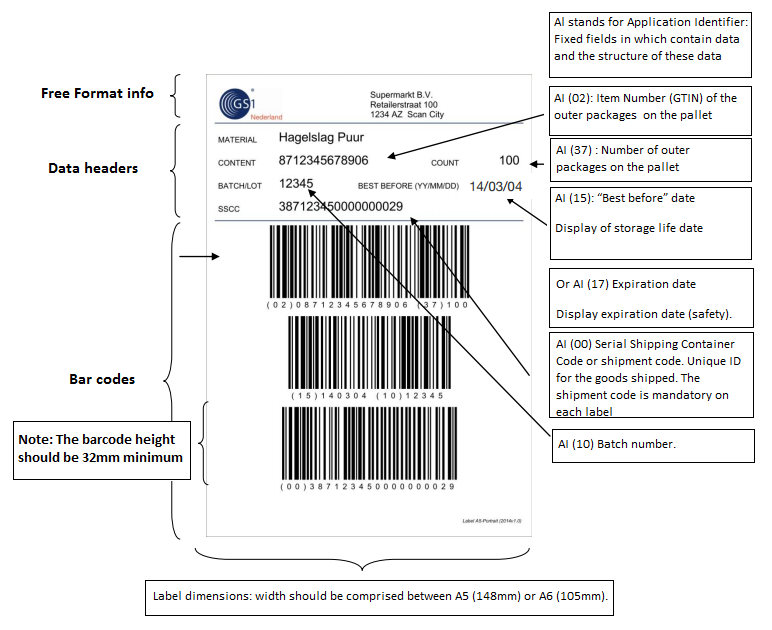 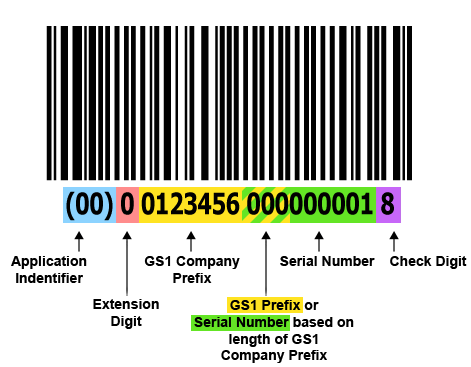 The AI 00 indicates that the SSCC-18 data structure will follow. However the AI identifier could have a different value for other applications (number of containers, batch number, expiration date). But SSCC-18 labels always begin with 00.

The Extension Digit is used to increase the capacity of the Serial Reference and has no defined.

This is a control number. The purpose of a check digit is to verify that the information on the barcodes has been entered correctly.

Like most inventions, barcodes are an answer to a problem. Without the invention of the laser, our current barcode wouldn’t have been possible at all. But let’s not get ahead of ourselves…

The earliest thing resembling a barcode was invented by Bernard Silver and Norman Woodland in the early 1950s. In 1952 these gentlemen filed a patent on what could be called a barcode. It wasn’t a rectangular shape but it was formed by concentric rings similar to a dart board. The round shape was supposed to facilitate reading under different angles. The code-reading device was also described in the patent. The major problem was that at that time the technology wasn’t advanced enough to print the barcode clearly. Due to the poor quality of the print, the scan results were far from optimal. The scanner has also several issues, so the technology fell into oblivion. At least for another couple of years…

In 1959, The Pennsylvania Railroad was seeking a system to automatically identify railway carriages and wagons. Engineer David Collins was chosen to lead the project and invented a system called “Kar Trak”. It began to look like our current rectangular shape, but it was composed of reflective red and blue dots that could create a unique code. Economic factors and problems caused by dirty train stations caused the Pennsylvania Railroad to stop the project. However Collins understood the potential of the technology and he will later implement it in other forms.

In the meantime, Charles Townes and Arthur Schawlow at Bell Labs were working on a technology called MASER (like LASER but instead of light [letter L], they worked with short wave radio signals or Microwave [letter M]). In 1957, a student called Gordon Gould thought that MASER technology might work better with light rather than short wave radio signals: the LASER was born (Light Amplification by Stimulated Emission of Radiation). Stimulated Emission found its origin in the theories developed by Albert Einstein.

David Collins hadn’t given up and founded a company called Company Identics Corporation in 1957. He invested heavily in in laser technology to read black and white barcodes. Computer Identics delivered its first system to a General Motors plant in Flint, Michigan. The system had to identify gearboxes on the production line. The US Postal Service began to pay interest to the technology too: they wanted a system to record vehicle movements. Animal food producer KalKan in turn, was looking for a cheap and simple way to manage the warehouse. The barcode story was picking up speed…

In 1966, the cooperation of American supermarket chains called the NAFC (National Association of Food Chains) decided to study the possibility to implement this technology in supermarkets. The Woodland patent was purchased and it was agreed that the concept would be tested in Get supermarket in Cincinnati. However, the system still needed to be improved to be fully operational.

The NAFC formed a team that would define the basis of barcodes as we know them today, and continued the development of the technology. Many issues needed to be resolved such as problems in the reading equipment (heat and distortion) and printing issues (ink smearing due to slow drying). But finally, in June 26 1974, the first system went into production: a pack of Wrigley Juicy Fruit chewing gum was the first item to be scanned in a supermarket. The honor fell to Marsh’s Supermarket in Troy, Ohio.

Source: this article was written by John Nachtrieb